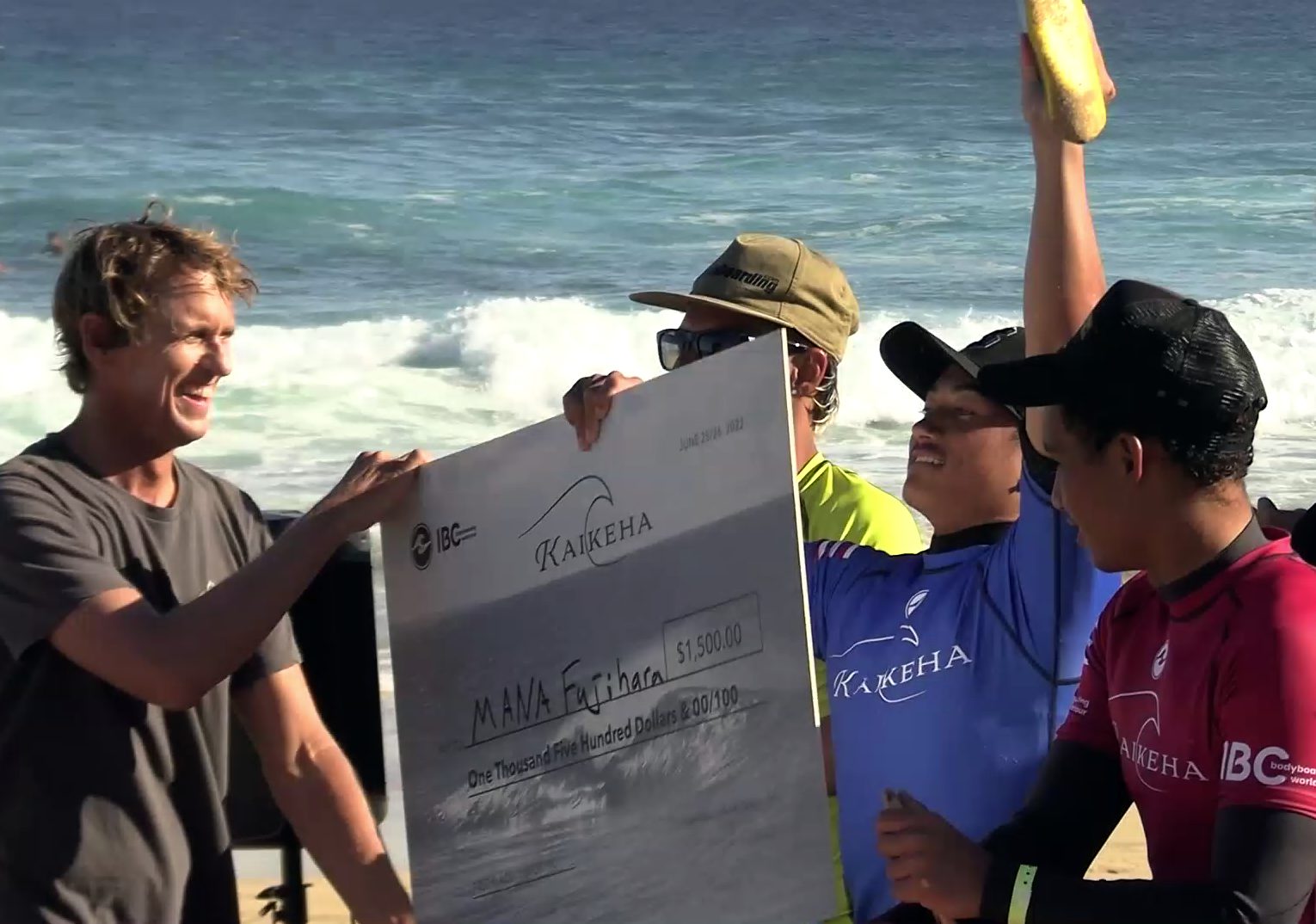 Young riders from throughout the islands excitedly gathered early on Sunday morning, June 26th 2022 for a historic opportunity to showcase their talent to the world. The typical trade wind breeze along with a solid and rising south swell made for classic conditions at Sandy Beach’s “half-point”. The 18 and under competitors, both male and female gathered for a riders meeting lead by Jeff Hubbard and judging criteria explained by Pat Caldwell before the opening ceremony with the protocol lead by Davin Alexander.

Round 1 saw all riders competing in 4-rider heats, where the stand outs included Albert Kamaka Jr., Nash Burkart, and Kamaehu Kahaunaele all achieving totals of 15 points or higher. Cleanly executed flips where the moves that were setting top riders a part from the rest of field. Cleanly executed rolls were also key moves that factored into to most advancing positions repertoire.

Round 2 already started to see some stacked heats, as known names from around the state met for another 4-rider heat. Logan Somoba, Travis Wood, Aarya Tabalno and current California Tour Champion Kainalu Shim were some of the big names to not see advancement in the fierce heats.

Round 3 moved to head-to-head match-ups, where there were some tight heats as well as the highest single wave score and highest heat total of the event which was established by Kamaehu Kahaunaele (9.33 + 8.57 = 17.90). The 9.33 awarded for a late take-off into the barrel followed by a flip out

Next was the tremi-finals; 3x 1-on-1 heats that would progress the events 3 finalists and place =4th for Haven Ahn, Kamaehu Kahaunaele, Kaedin Grace who each had performed exceptionally throughout the event.

Before the finals, the 3 female contestants who each fought it out in the open Junior Pro division were given an opportunity to win their entry back in a women’s Junior Pro expression session. With each of them busting rolls and spins, the scores were tight, but it was Kelea Molale-Gonzales winning over Kaipo’i Koa and Aarya Tabalno.

The finals saw a battle royale between the events 3 most consistent and dominant contenders. The extended heat time in the final helped each rider to establish solid scores through their world class surfing. Shaden Ahn who finished in 3rd had a wave with 2 flips, which sent the crowd into hysterics. Albert Kamaka Jr. the runner-up was able to find the best lefts of the event and connect huge moves off the end section, completing his rides riding up onto the shore. The event Champion Mana Fujihara hit the riskiest section of the event with a very critical power-roll. Mana’s surfing throughout the event was technical, explosive and smooth and his win was very well deserved.

Overall the event was a huge success because of the immense talent that was on display by all the participants. The event couldn’t have happened without the incredible support from the community, especially the Hawaii Tourism Authority and the O’ahu Visitors Bureau and all the other wonderful sponsors. Also, Mahalo Nui Loa to our Kaikeha volunteers and staff.